Will this make it cheaper? Apple is assembling the newly launched iPhone14 at the FoxConn factory in Chennai. However, its top-end iPhones like the Pro or Pro Max series are not assembled in the country. AP

Apple lovers in India are all charged up. The “Made in India” iPhone 14 is coming soon.

The tech giant has confirmed that the newly launched iPhone 14 will be assembled in the country. It told the news agency Reuters that it is “excited to be manufacturing iPhone 14 in India”.

Also read: Why is iPhone 14 so expensive in India? Where do consumers pay more and where do they pay less?

Where is the iPhone being made?

The new iPhone 14 is being manufactured at Foxconn’s Sriperumbudur facility near Chennai. The company is the world’s largest contract electronics manufacturer and an iPhone assembler, PTI reported.

The latest iPhone was launched by Apple’s chief executive officer Tim Cook during the company’s annual “Far Out” event on 7 September. The new lineup, which includes iPhone 14, iPhone 14 Plus, iPhone 14 Pro and iPhone 14 Pro Max has an improved camera, powerful sensors and satellite connectivity feature to send SOS texts in emergencies.

Tap the threads below to learn about the all-new iPhone 14 and iPhone 14 Pro and discover which one is right for you. ⬇️

What does mean for India?

The prices of the iPhone 14 are among the highest in India compared to the rest of the world because of taxes and duties. In India, the prices of Apple’s latest line-up start at Rs 79,900.

The price of the pro model has been hiked by Rs 10,000. The Apple iPhone 14 Pro could cost Rs 1.30 lakh and iPhone 14 Pro Max will go up to Rs 1.40 Lakh, making them the most expensive iPhones to be launched in the country.

iPhone 14 series prices will also include 18 per cent GST and 22 per cent customs duties (levied before GST).

By manufacturing the iPhone 14 in India, Apple will be able to save 20 per cent on import duty. While this may impact the price of the model later there may not be any immediate changes in the pricing, according to a report in India Today.

The new iPhones will only be assembled in the country; hardly any of its components are locally sourced. Hence, the cost of production is expected to remain the same. 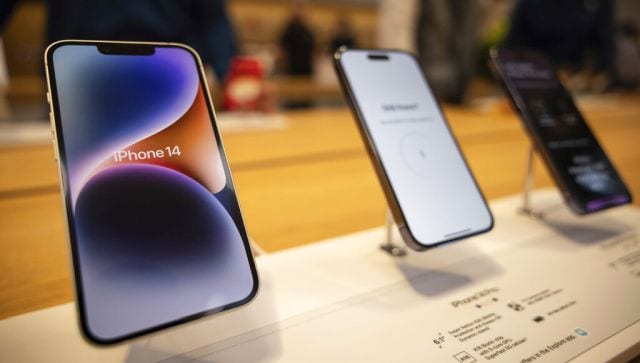 The prices of the iPhone 14 are among the highest in India compared to the rest of the world because of taxes and duties. AP

Is this the first iPhone to be made in India?

No. The iPhone 14 is the sixth iPhone to be made in India.

Apple started making iPhones in India with the iPhone SE in May 2017 at its contract manufacturer Wistron’s facility in Bengaluru. In 2019, it promoted the iPhone 6s as part of the “Made in India” campaign after its India shipment decreased from 3.2 million units in 2017 to 1.7 million units by the end of 2018. iPhone 11, 12 and 13 were also assembled in India.

The company works with three partners to assemble iPhone models in the country – Wistron, Foxconn, and Pegatron.

Apart from “Made-In-India” labels on the boxes of iPhones sold in India, there has been no change in pricing for iPhone 13, iPhone 12 or the other older models. It is only during the festive sales that iPhones become cheaper because of limited-duration bank offers and cash backs. Local manufacturing doesn’t reduce the MRP, reports News18.

Apple does not make its top-end iPhones like the Pro or Pro Max series in India. Also, the phones made here are for domestic sales within the country.

If the phones are made in India, why are they not cheaper?

Most iPhone components are made in China and Apple has to pay import duty on them.

Assembling the phone in India is unlikely to bring down prices as Apple’s OEMs (original equipment manufacturers) pay high rates of import duties on components. Besides import duty, there is 18 per cent GST and other fees, and Apple’s profit margin. Hence, the costs remain high, reports Outlook.

Apple also relies on third-party retail networks to sell its smartphones and other products in India which adds to the cost.

According to a Bloomberg report, the first batch of Indian-made iPhone 14 models will be finished by the end of October or early November. This will be the first time that production of a new generation iPhone will begin in another country simultaneously with China.

Why does Apple want to make phones outside China?

Stringent COVID-19 restrictions in China hit the production of Apple phones and their exports. To cover the losses, Apple asked its other contract manufacturers in Vietnam and India to ramp up production to meet the demands.

The ongoing geopolitical tensions between Washington and Beijing have pushed the California-based company to not depend so much on the Asian giant.

Analysts at JP Morgan expect Apple to move about five per cent of iPhone 14 production from late 2022 to India, which is the world’s second-biggest smartphone market after China, reports Reuters. Apple could make one out of four iPhones in India by 2025, JPM analysts said in a note last week.