WhatsApp has brought some sweeping changes to the way it implements its view-once images and videos. It is also bringing a feature that was highly demanded – polls in group chat. In the latest Beta update of WhatsApp, users who send an image or a video as see-once will now have the option to restrict the receiver of the media from taking screenshots or recording their screen while the media is being viewed.

Some beta testers who get the latest beta from the Play Store could probably have this feature right now. When the receiver tries to take a screenshot of the view-once media, the recipient is never told, but the attempt is blocked by WhatsApp’s API. Similarly, screen recording is also disabled while seeing a view-once image or video. Even if a user tries to use third-party add-ons, the image will always be black.

Since the new ability is limited to seeing once-only photos and videos, you can still snap screenshots of normal chats and discussions even with fading messages. You can’t forward, export, or save view once images or videos. The only way a recipient can still capture a view once photo or a video is by using a second device. So always it is better to be careful with what kind of media you’re sending and whom you’re sending it to, even if you’re enabling view-once, when sending them.

How WhatsApp Group Polls work
In the latest Beta version of WhatsApp, users will have the option of setting up polls in certain group chats. For the time being, only group admins will be able to set up a poll. 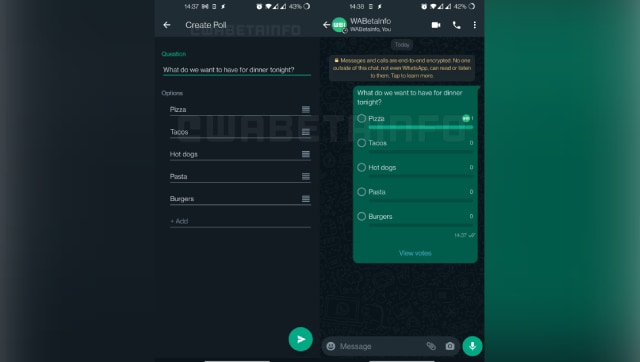 WhatsApp’s new poll feature will allow users to include up to 12 options, and sort them out in any way. Admins will also have the option to allow users to select more than one option.

When a new vote is cast, the poll is promptly updated to reflect the new outcome; by tapping “See votes” in the poll results screen, regular users may view more specific information about the voters.