OnePlus 11 vs Google Pixel 7 Pro: what to expect? 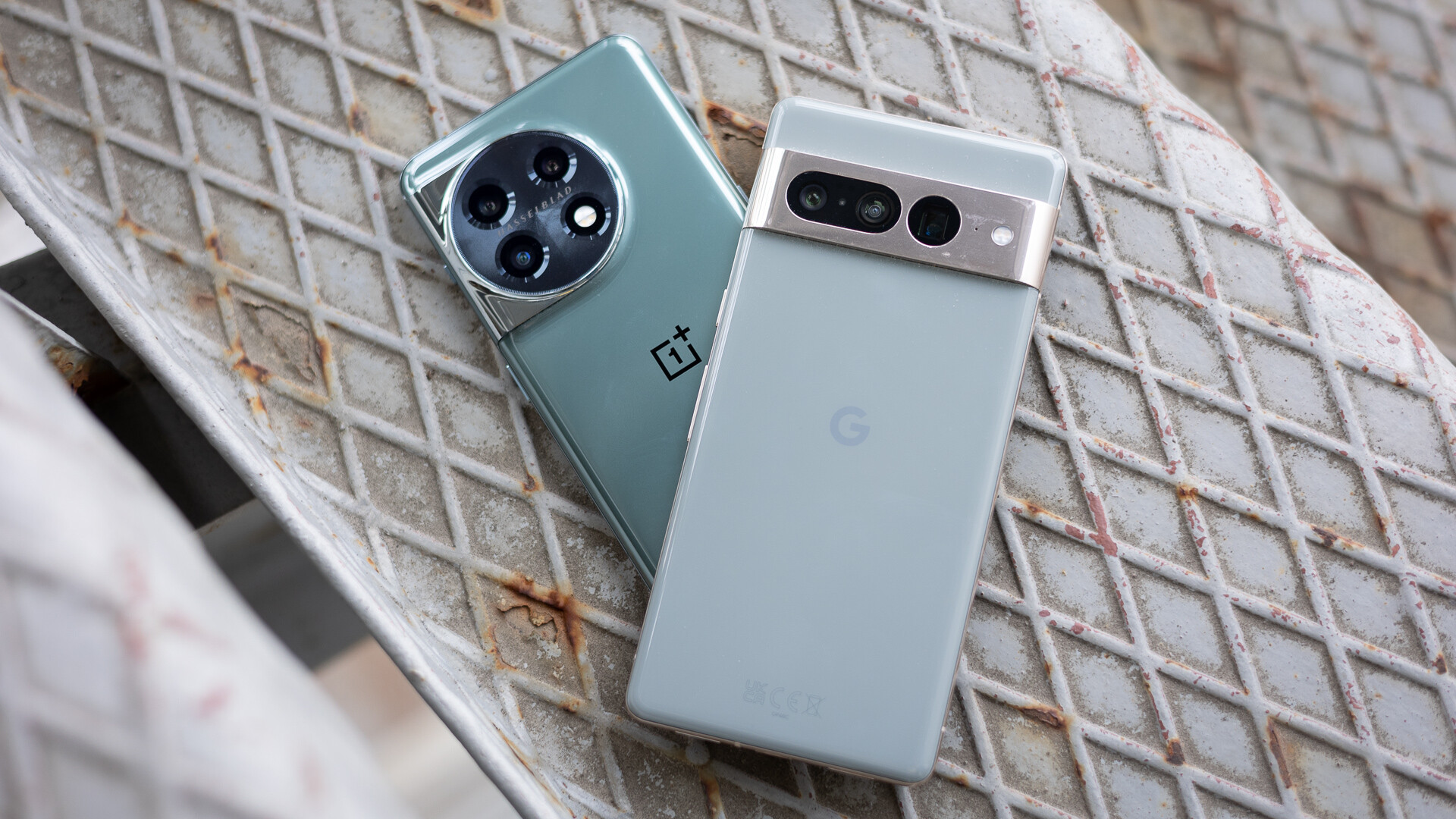 When speaking about the very best phones, you have the iPhone Pro Maxes and Galaxy Ultras of the world, but those cost an arm and a leg. But what if you don’t want to spend all that much?

This is where two names stand tall: OnePlus and Google. The new OnePlus 11 is the company’s upcoming 2023 flagship, the cream of the crop with a top-tier Snapdragon 8 Gen 2 chip on board and all the bells and whistles, but can it match the $900 Google Pixel 7 Pro, a bargain in the flagship space?

We look at the performance, cameras, design and all the other interesting details to see how these devices that are more affordable than mainstream flagships compare between each other.

OnePlus 11 vs Google Pixel 7 Pro in a nutshell:

Design is a subjective matter, but what is undeniable is that both of these are built to a high, flagship-grade standard with a sturdy aluminum frame and glass on both the front and back.

The OnePlus has a round camera system that stands out in a crowd, but so does that signature Pixel camera bar.

The Pixel has its power and volume keys all on the right side, while the OnePlus has the power key on the right and the volume buttons on the left which makes a bit more sense to us. We also love having the physical Alert Slider (aka the mute switch) on the OnePlus 11, so you can quickly jump between a silent, vibrate-only and sound-on mode.

Both phones have an IP68 water and dust protection rating, which has become pretty much expected for flagship phones and even more affordable devices.

We don’t yet know the color options for the OnePlus 11, but a black version is pretty much a given. The Pixel 7 Pro comes in three colors, a black, white and then this very distinct hazel model, which we like a lot.

When it comes to displays, both have a large 6.7-inch OLED screen, but with slightly different aspect ratio. The OnePlus screen is taller and narrower at 20:9, while the Pixel has a wider screen at 19.5:9. Both feature crispy clean 1440p resolution and both support dynamic refresh rate that can go as high as 120Hz for that buttery smooth scrolling.

For biometrics, the OnePlus 11 is expected to have an optical under-display fingerprint scanner, which has been super fast and reliable on previous OnePlus, while the Pixel 7 Pro also has an optical fingerprint reader, but for some reason it is still a bit on the slower side. This remains a bit of an annoyance with the Pixel.

Snapdragon 8 Gen 2 is faster than the Google Tensor G2

Equipped with the newer Qualcomm Snapdragon 8 Gen 2 chip, the OnePlus 11 has a sizable advantage over the Pixel and its in-house Google Tensor G2 chip when it comes to firepower.

The new Snapdragon 8 Gen 2 shapes up as a beastly performer with good power efficiency.

The base model of the OnePlus 11, however, is expected to come with 8GB of RAM, and you’d need to step up to the beefier version which has 12GB RAM to match the memory on the Pixel 7 Pro.

There is also a difference in the software. While technically both phones feature Android 13, the OnePlus has a custom skin on top, while the Pixel runs its own version of clean Android.

The difference is not just in looks, but also in software updates. The Pixel gets the updates on day one of their release, while the OnePlus takes a couple of extra months to deliver them. Both phones are expected to support 3 years of major software updates. The OnePlus should get 4 years of security updates, while the Pixel promises 5 years of security updates.

Can the OnePlus play the Google Pixel’s game?

While both have imposing looking cameras, we all know that the Pixel has the advantage with its superior processing.

OnePlus has partnered up with Hasselblad once again, but we don’t expect miracles.

Looking at the camera hardware, both phones have a triple rear camera system, but the main camera on the Pixel uses a larger sensor, and it’s zoom camera is an impressive 5X periscope one that gives you excellent zoom range, while the OnePlus only has a 2X zoom camera.

We have not yet seen camera samples from the OnePlus, though, so one shouldn’t hurry with the conclusions. Check back here in a while to see a more detailed analysis of the camera quality on these two.

With dual speaker systems that are the norm these days, you have pretty much the same audio hardware on the OnePlus 11 and Pixel 7 Pro with a main, bottom-firing speaker and a helper speaker in the earpiece.

It’s still too early to know much about the OnePlus 11 speaker quality. We will be updating this section with more details after we test the OnePlus 11, so stay tuned for that.

Can the more power efficient chip on the OnePlus help it get longer battery life?

Both the OnePlus 11 and Pixel 7 Pro come with the same size 5,000mAh battery inside.

This is a solid size, which has become the norm for flagships, and is a guarantee for a very good battery life.

However, with the newer and more power-efficient Snapdragon 8 Gen 2 chip in the OnePlus, we expect it to have a bit of an edge in real-world battery life.

We will be testing that with our independent battery tests as soon as we get the OnePlus 11, so this section will be updated with more interesting details in the near future.

The big difference between OnePlus and most other mainstream phone makers, however, remains charging and that difference will only grow. The OnePlus 11 is expected to support up to 100W charging speeds (and with a charger in the box), which means a full charge will take around half an hour, while the Pixel with its 23W charging speeds takes around 1 hour and 40 minutes.

Both phones will also support wireless charging, and again, the OnePlus boasts faster speeds (we expect 50W+ wireless charging speeds) vs again 23W on the Pixel (with a Pixel stand). Do keep in mind that OnePlus uses its own proprietary charging tech, so you need to get OnePlus chargers both wired and wireless, if you want to hit those maximum charging speeds.

And here is a quick overview of the specs differences between the two:

So at the end of the day, the OnePlus 11 shapes up as another reliable and speedy performer with fast charging, excellent screen quality and an improved camera.

The leaked specs don’t suggest a camera revolution, though, and for those who value a great camera, the scales tip in favor of the Pixel 7 Pro.

Last but not least, the success of the OnePlus 11 will depend a lot on its price. The Pixel 7 Pro is an incredibly lucrative offer at just $900, and if the OnePlus 11 costs significantly more than that, it will be hard to find the economic reasons to justify a purchase.