How scientists discovered proof of the world’s 6th ocean by examining a diamond- Technology News, Firstpost

Up until now, we have been taught that there are 5 oceans on our planet – Atlantic, Indian, Arctic, Southern, and the largest of them all, the Pacific. Scientists have now discovered evidence of the existence of a 6th ocean deep inside the Earth’s surface, between the upper and the lower mantles. How exactly did they do that? By examining a recently mined diamond. The diamond in question was formed about 660 kms below the earth’s surface, which confirmed a long-standing hypothesis that ocean water accompanies subducting slabs and thus enters the transition zone. The new findings reveal that Earth’s water cycle includes the Earth’s interior. The diamond was found in Botswana. A team of scientists from Germany, Italy and the United States, analysed the diamond and found that it was formed at 660 kms below the surface of the planet at the interface between the transition zone and the lower mantle. Further analysis of the diamond using Raman spectroscopy and FTIR spectrometry revealed that the diamond had traces of a rare mineral called ringwoodite. Ringwoodite is only found in areas with high water content.

The study by the German-Italian-American research team has been published in the journal Nature, which states that the internal structure and dynamics of Earth have been shaped by the 660km boundary between the mantle transition zone and the lower mantle. 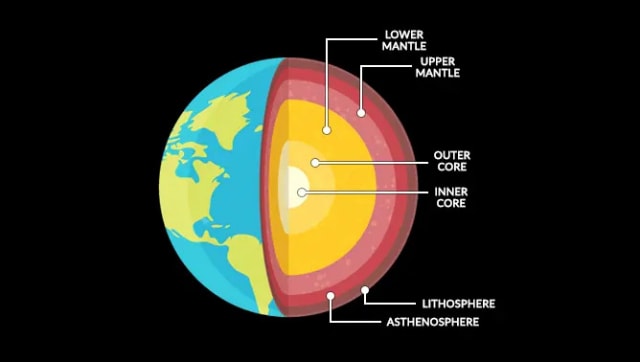 A diagram of the various layers that make up the centre of Earth. The new ocean is supposed to be situated between the upper and lower mantles. | Image Credit: Wiki Commons