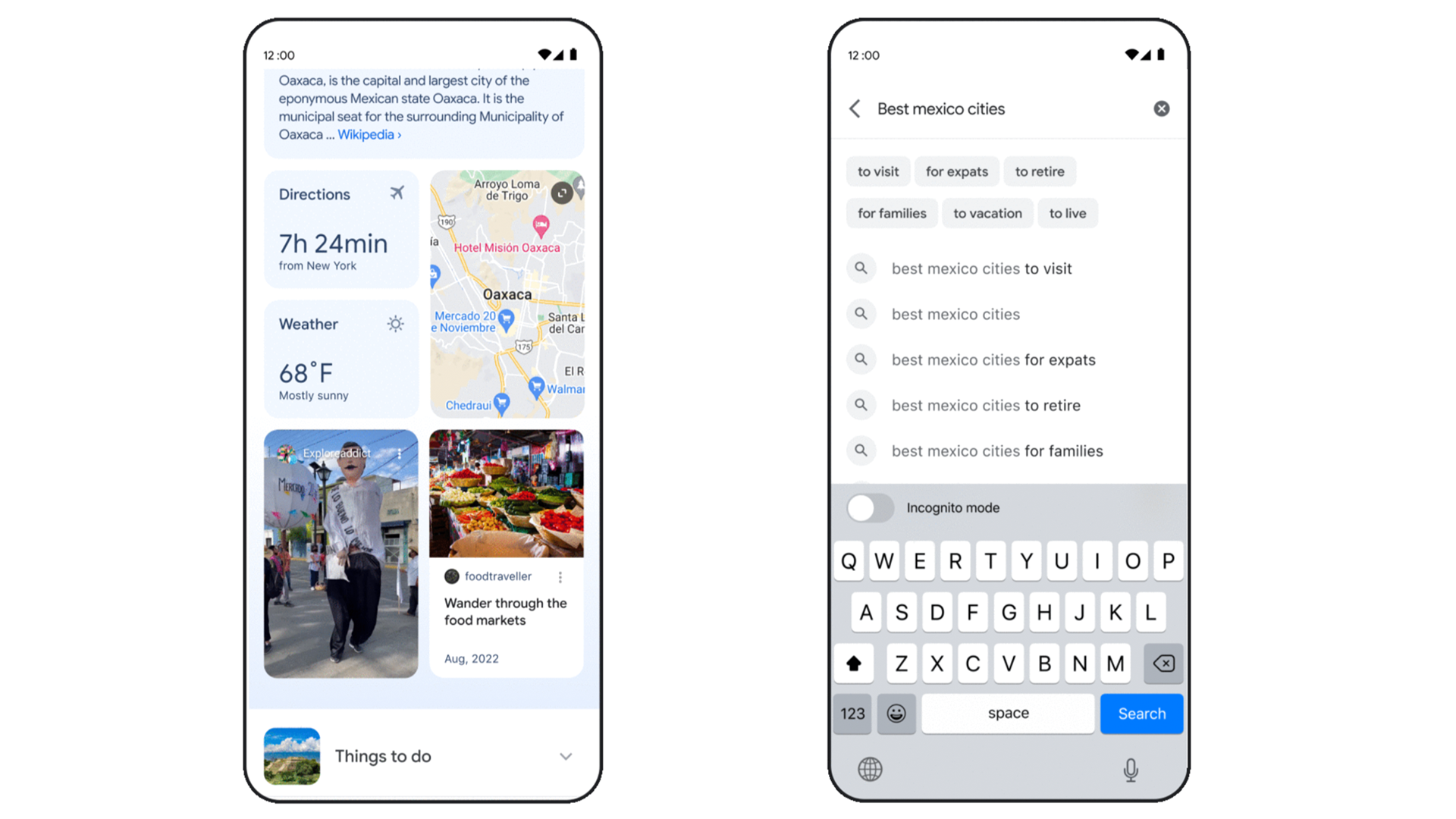 Google has announced a bunch of changes to its core search functionality, focusing on making searching the web a quicker and more convenient process, and more besides.

Announced at its Search On conference (opens in new tab), All of these changes will be rolling out in the US down the line, and the first major introduction is that shortcuts to various tools are going to be brought in, nestling right underneath the search bar.

These are things like an icon for translating text with the camera, or identifying a tune by humming it, or indeed to help with a homework problem via the camera – common tasks that you might need, and can now be very swiftly accessed with a tap on the relevant shortcut.

In this case, the feature is coming to the Google app for iOS in the US (English language) to begin with, and a wider rollout will doubtless follow.

In terms of making core search quicker and more intuitive, Google is ushering in topic options that appear directly below the search box as you type a query. The example Google gives is someone typing a search for ‘best Mexico cities’, and after having entered that text, a bunch of suggestions for finishing the query pop up – such as ‘for families’, ‘for expats’, ‘to retire’, and so forth. These are the most likely options you’ll need, and will hopefully allow you to quickly finish your query with a simple tap.

Again, this feature will launch in the US (in English) to begin with, in the “coming months” Google informs us, and the same is true of the remaining capabilities we’re about to explore.

Next up are the details surfaced by a search, which again in Google’s example of searching for a city will now prominently include visual stories and the likes of video clips from folks who have visited that particular place. The emphasis is on imparting more practical info such as tips on getting around the city, how to travel there, or what to do during your stay, rather than just, say, historical or geographical facts for example (not that you won’t still receive some of that as results).

After a search, suggestion buttons will also pop up below the search box pointing to further topics you might want to explore, such as the beaches of that city you’re going to visit – and you simply tap these, and dive down even deeper into further suggestions if required.

Finally, Google tells us it’s revamping the way search results are presented to “better reflect the ways people explore topics”, meaning that as you scroll down, related topics will be highlighted. Sticking with the city example provided, those subjects include the likes of results pertaining to the local cuisine and recipes, musical traditions, art, and so forth.

Analysis: Some chunky changes to move with the times

The broad thrust here, then, is to make searching easier and quicker as we mentioned at the outset, and to surface more practical content and advice – with the likes of videos from folks who have visited a place – as well as making it as simple as possible to see and explore all manner of related topics.

In some corners of the web in more recent times, we’ve noticed complaint threads about how Google isn’t what it used to be when it comes to the quality of search results, and so perhaps the company felt it was time to start changing things up – in a pretty big way. There’s certainly a fresh take on search here with all these different elements, so it’s going to be interesting to see how this plays out when we actually get to use the new search; and of course what the reaction is from those who have become more skeptical about Google.

Google is about as old a veteran of the web as you’ll find, and mustn’t fail to move with the times. So when there’s chatter about youngsters hitting up TikTok to discover things rather than Google search, that must be, well, maybe not a threat to Google, but certainly something which is a bit of a worry and should be paid attention to.

When other regions outside the US will get these changes, we don’t know, but seeing as they’re down as arriving in the “coming months” in the States, it sounds like it’ll be a slow rollout, particularly in global terms.